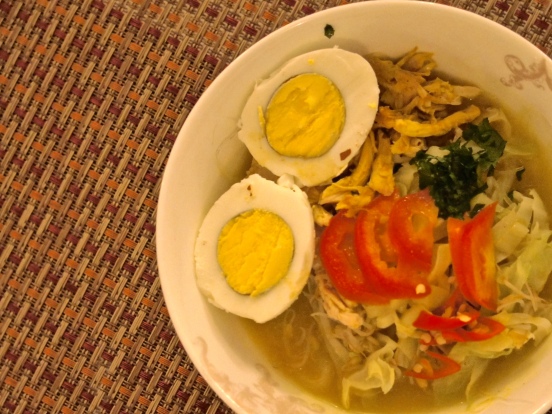 Soto is one of Indonesian version of soup with spiced chicken or beef broth. It is normally served with hard boiled egg, rice, thin vermicelli noodle, fried shallot, chopped celery leaves, lime and sambal. There are many version of Indonesian soto, it depends on the place of origin. The differences normally can be seen through the type of broth, coconut milk broth or clear broth, as well as the type of meat which can be chicken, beef as well as offal.

I believe that there are more than 10 type of Indonesian soto. Those are including Soto Betawi with beef and coconut milk based broth, Soto Lamongan, Soto Kudus, Soto Mie Bogor, Soto Sulung Surabaya and also Soto Banjar. And today, I would like to share the recipe of Soto Ayam Yogya. 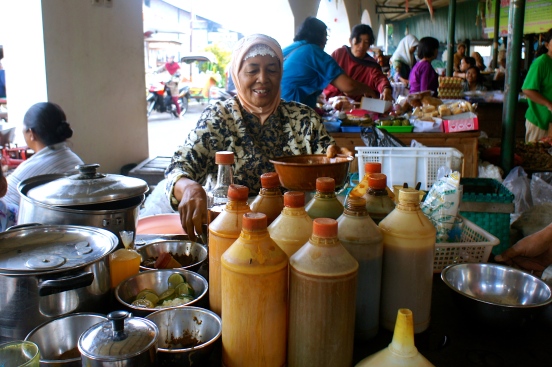 Since I was child, I have been introduced to jamu by my parents.  Nearly every day, my grandmother always bought me a glass of kunir asem (kunyit asam) or beras kencur from Bu Tarmi, a neighbor of mine who made homemade jamu.   Beras kencur is believed to help me to overcome coughing; while kunir asem is believed to cool down the body from fever.

Jamu is a traditional herbal medicine, which is made from parts of plant either from its roots, leaves, fruit and also bark; such as tamarind, turmeric, ginger, papaya leaf, curcuma and also bratawali. Some of jamu tastes sweet but some of them taste very bitter.

As I understand, there are many type of jamu which are specifically made to cure illness such as stiffness, dizziness, fever, high cholesterol, itching, diabetes and hepatitis. While there are also some of jamu are made to improve sexual pleasure either to increase men sex drive such as purwoceng and tongkat ali  and also to tighten the women’s vagina such as galian rapat, rapat wangi or empot ayam.

A traditional homade jamu seller was making a glass of galian rapat, which is believed to tighten [2012: E O]

Unfortunately since I moved to Bali then to Jakarta, I could not find any good homemade jamu. Many of those jamu just tastes like a glass of mineral water with a little bit of food coloring. Or perhaps, I just have not found the proper place that sells proper  homemade jamu.

Other than that, despite the fact there are many instant jamu sold in the pharmacy or supermarket, I would not buy it because it does not have the same taste as the homemade jamu. I just want a real homemade jamu. Period!

Therefore whenever I visit Yogyakarta, I often try to go to Pasar Pujokusuman to buy a homemade jamu from an old lady, who has been selling  for many years [unfortunately, I have never asked what her name is] . She always is concocting the remedy as the customer order the jamu so she can make a fresh glass of jamu for the customer.

Every time I visit her stall in Pasar Pujokusuman, I always buy a glass of galian rapat, galian singset and also kunyit sirih. But oddly enough, if a female customer wants to buy a glass of galian rapat, rapat wangi or empot ayam [type of jamu which is believed to tighten the vagina], she always asks the customer whether she is married or not, instead of asking whether she is virgin or not. Weird, isn’t?

I wonder if she would ask a male customer, who wants to buy purwoceng or tongkat ali jamu [type of jamu which is believed to increase male sex drive], the same questions. *sigh*

Well I guess as I am living in a ‘religious’ country, consuming galian rapat, rapat wangi or empot ayam is considered to be sinful if you are not married because it is then  letting somebody to do a free sex with a good quality vagina. But who gives a damn about it anyway?! You can always lie about your marital status just for a glass of homemade jamu. No?

So if you have never tried to drink jamu or you wanna tighten your vagina or increase the sex drive,  you better try it. I can tell you that it works well to my body. Other than that, it tastes good and very cheap.