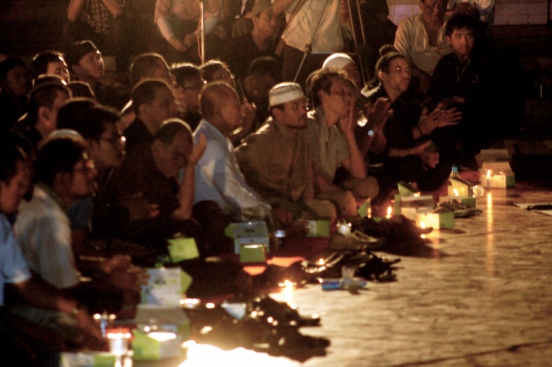 I am a citizen. I am a journalist. As a journalist, I like to observe, I like to listen to my source when they tell me a story. I do not interrupt them. I let them  take all the time that they need. It is because I realize that people like to be listened to.

Since I started my career in journalism, I often covered stories on human rights and legal issues. As a result, I am very aware of human rights issues now. There is a saying in journalism “Bad news is good news“. And working as a journalist in Indonesia, I would find ‘good news‘ very easily. It is because everyday I see and hear s about so many  cases of human rights violations in this beloved country.

The victims of the attacks mentioned in the report belonged to religious communities including Catholic and Protestant Christians, and Islamic groups Shia, Sunni and Ahmadiyah.

Some people say that journalistic duties are to JUST write down the fact and present it to the public, we must not be involved. That is so true. But sometimes, I questioned myself how can I help the victims? I don’t want to be a hero. But I am a human with heart and feeling. 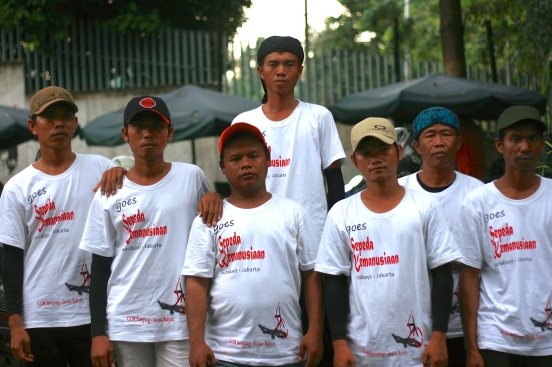 Ten Shiites from Sampang, Madura, East Java, are heading to Jakarta on bicycles to meet President Susilo Bambang Yudhoyono and directly convey their complaints over being expelled from their own village in August 2012. 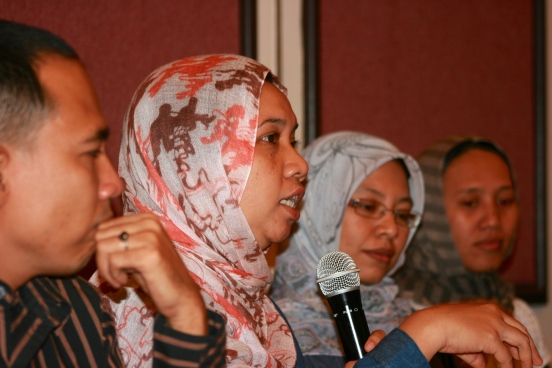 Norma Manalu, an activist from Aceh, speaks at a June 4th gathering about women’s rights in Aceh, at Hotel Acacia in Jakarta. Activists say they are not against Sharia Law but question the way it is being implemented.

My heart beat stopped when I saw women crying because they could not use their church for worshiping God on Sunday. I cried when I heard that three Ahmadiyah followers were killed in West Java.

I was speechless when I heard a Syiah  follower had nothing to say to his four years old boy that they no longer have house because their house has been burned down by extremists in Sampang, Madura, East Java.  I wanted to scream to the government of Aceh for regulating women’s clothing and movement in Aceh as if there are not more important things to be involved in.

Akh…. Indonesia!  Don’t you remember what your teacher taught you in the class when you were at Elementary School? They taught us about Pancasila and Bhinneka Tunggal Ika (Unity in Diversity).

Akh… Indonesia! We forgot how to respect each other. We forgot the value of humanity. We forgot our national motto, Bhinneka Tunggal Ika . We just care about ourselves and be selfish instead.

Indonesia! We forgot that the Indonesian Constitution has guaranteed its citizen to choose and practice their religion. Yet, Ahmadi cannot use their mosque and some Christians cannot use their churches to worship God.

President Susilo Bambang Yudhoyono has just received theWorld Statesman  Award for promoting religious freedom  in Indonesia, while in reality your people cannot  practice their belief and religions in safety.  They come to you to convey their problem, yet you don’t even have five minutes for them. Should you wait until the table turn on you?

Bapak SBY, they are your children. They consider you as a father hence they come to you. Please kindly open your eyes, open your ears and open your heart to them.  Help them justice.

Bapak presiden, they might not have a high education but they know the value of humanity. Open your heart, open your door for them. It is ridiculous that they should come to you because the local government were too blind and to dumb to hear their problem.  We all just want to live peacefully in our home country.

Oh here… I have a song for you Pak Beye “Dear Mr. President” by Pink. I hope you enjoy it. 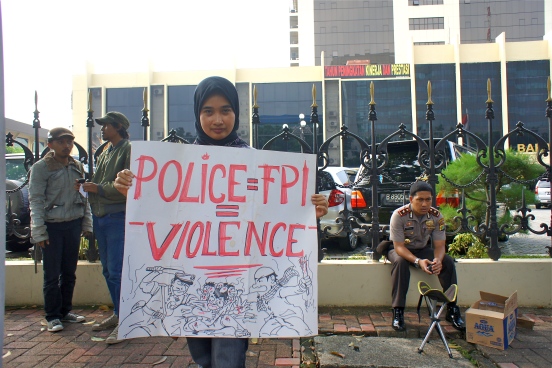 An FPI-Free Indonesia supporter holds a sign at a rally attended by about 50 people in front of the National Police Headquarters in Jakarta on May 10th, 2012. The group is demanding a stop to violence committed in the name of religion. [2012: Oktofani Elisabeth] 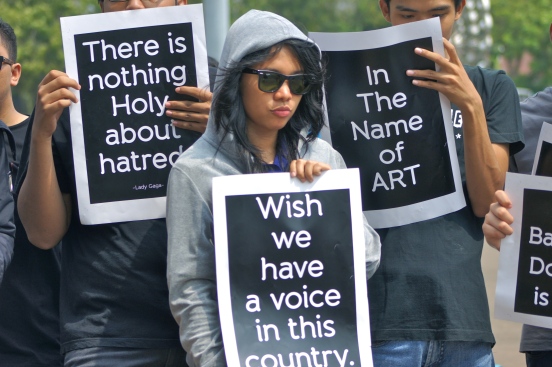 Indonesian Youth’s Express their disappointment to the government because Lady Gaga had to cancel her sold-out show in Indonesia following protests by Islamic hard-liners and conservative lawmakers, who said her sexy clothes and dance moves will corrupt young people [2012: Oktofani] 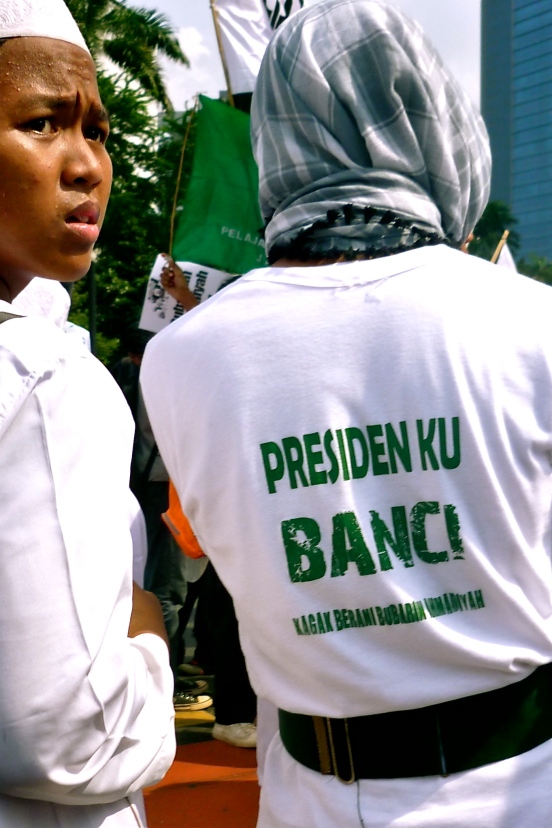 The protesters called President Susilo Bambang Yudhoyono “banci,” which literally translates to transvestite, saying he was a coward for not disbanding Ahmadiyah. [2011: Oktofani Elisabeth]