When I returned to Jakarta from Canada, I just realized how polluted Jakarta’s air is. This condition has made me thinking twice about my morning routine of doing street running on daily basis. However, instead of discontinue my morning routine, I decided to run very early. Normally I do it at 4 a.m. It might sound crazy but that is the only time where I can breathe a little bit of fresh air in the city.

My new activity somehow has opened my eyes about the other side of life of Jakartan. At 4 a.m, there are still many young people hanging out in one of the most popular Jakarta public park Taman Suropati. Based on my observation, some of them are having a fun chat, some are having a serious discussion, some are singing or dancing and some are having a very very very late dinner or super super early breakfast. Meanwhile, the city janitors are getting ready to sweep the street and some street food vendors are cleaning up their cart, eating utensil and getting ready to go home.

At the first early days, I somehow notice how dirty Taman Suropati is. Many people just leave out plastic waste, tissue or paper at the park. They simply do not care to throw it a proper place. I must say that it is very upsetting to see Jakartans just throwing plastic waste in the park. It just made the park look dirty and ugly. Yet, I also notice that some scavengers actually take the advantage from the dirty environment whereby they can collect those garbage and turn it into some cash. Still, it does not mean that I agree that they do not throw the garbage to the bin. So, I decided to talk to one of them. 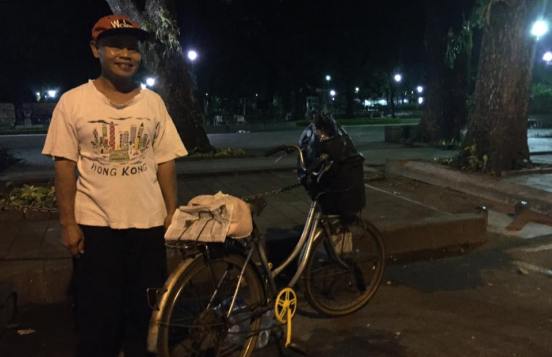 His name is Mr. Khodir. He is a 47 years old janitor, who works for Jakarta Provincial Government. His duty is to sweep the street along Sunda Kelapa Mosque area and the official residence of vice president in Menteng area. He works eight hours a day and starts at 5 a.m. Normally, he would finish his job by 5 pm with four hours of break in between.

As a janitor, he told me that he earns 2.7 million Rupiah. Unfortunately, he sometimes receives his salary once in three months whereby his salary will be piled up within three months. Although he receives a huge amount at the end, he simply cannot support his family properly because he does not have enough saving. As a result, he has to collect plastic waste and sell it. From that activity, he could generate money for approximately 50,000 Rupiah.

It is actually very saddening knowing the fact  that while he believes that he has a steady job to support his family, this condition somehow has “forced” him to be a scavenger to make sure there is always an adequate food for his family on the table and provide a proper education for his children.

Life is hard in Jakarta. It might be just as hard as another’s life in big cities across the world. For ordinary yet uneducated people, some of them would prefer to work their ass off, earn small amount of money and stay away from the dirty jobs, meanwhile some would choose to engage in dirty activity to earn big buck simply to meet up with big city’s lifestyle. It is you choosing it for yourselves.