O geez… I don’t know whether I have to laugh or cry. I was just blocked by Karrueche Tran, Chris Brown ex-girl friend. Why? I think it was because I asked her some kind of ‘offensive’ question via twitter “Why Breezy chose Rihanna and dumped her?” Well, I actually did not mean to be offensive but I knew it would turn it that way somehow.

So last Thursday morning, I was randomly watching video in youtube and found this video of Karrueche made a fun of Rihanna. Based on that video, I found that Karrueche was so mean to Rihanna… So I sent her a tweet

Ya! Ya! Many of us know that Rihanna was also mean toward her. Remember the rice cake tweet? In the end of the day, they both were so mean toward each other. Pssst…. I did a lot of research on their online war via Twitter, Instagram and Facebook – Geez… women! Why are we cruel toward each other when it comes to love relationship.

Anyway, after I sent the tweet to Karrueche… somehow I found that I was blocked by Karrueche as I was about going to follow her on twitter. I guess, she just wanna say ‘It ain’t nobody bidnezz’ as Breezy and Riri said it to the world.

I’m actually not a big fans of Rihanna … but I just found it interesting in some ways. Women tend to be cruel to other women when it comes to relationship.  Geez… Why am I writing about it?! It is not an important thing at all. 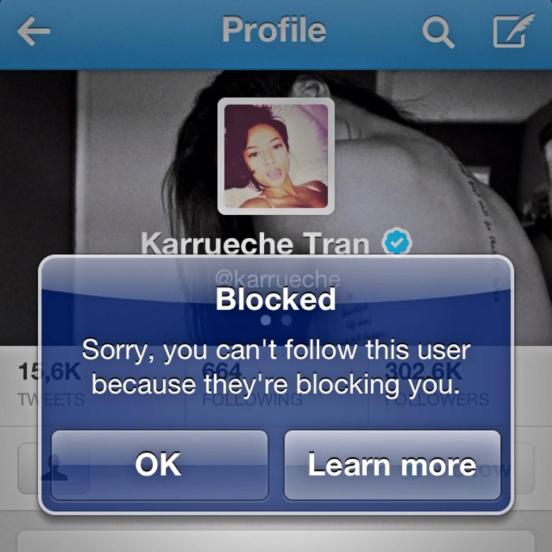 Sorry, you are blocked!

Frankly I actually have never really been interested with celebrity personal life gossip. I just always found it as rubbish ‘news’ and I don’t really need those kind of news. What do I need it for? Does it have any significant effect for my life? I don’t think. Hence I don’t really care about it.

So why am I even following the latest news about Riri, Breezy and Tran? Why am I even blogging about it? I don’t know.